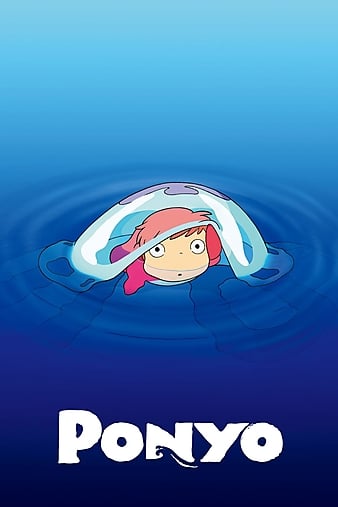 5-year-old Sosuke grew up in a small seaside town, and his home is on a cliff near the sea. One day, Zongsuke found a waste glass bottle washed ashore by the waves, with a trapped little goldfish inside. The little goldfish was named Bonnie. She was the daughter of the mermaid queen, and when she sneaked out to play with the jellyfish, she crashed into the bottle. Zong Jie brought Bonnie back to his home and kept it in a plastic basin. Bonnie had a great time at Zongjie’s house. She liked Zongjie and Zongjie also liked her. However, the happy days passed quickly, and Pony’s father Fujimoto took his daughter back to the bottom of the sea. Fujimoto was originally a fisherman, and later fell in love with the mermaid queen and became a resident of the sea.

After Pony returned home, she missed Zongsuke very much. She made a bold decision-she wanted to become a human being and be with Zongsuke. With the help of his sisters, Bonnie stole his father’s magic weapon and swims to the human world. Unexpectedly, the water of life containing dangerous magic power got out of control. As a result, the sea skyrocketed and the storm raged, and the sisters turned into terrifying giant fishes, and the waves rushed towards the cliff where Zongsuke’s family was…

The seaside town was submerged, and Pony did not expect that his good wishes would cause such a disaster. Can she save Zongjie?

When Ghibli announced that "The Battle of the Earth and the Sea" would be directed by the Miyazaki family’s eldest son, many people thought that the master Miyazaki, who had repeatedly expressed retreat, was really going to take the mountain. But what is surprising is that in the summer of 2008, this animation genius brought us a new work written and directed by himself-"Goldfish on the Cliff".

"Golden Fish on the Cliff" was born out of the well-known Andersen fairy tale "The Daughter of the Sea". The protagonist of the film is a small fish with a bun-faced face. Her tail stretches out like a skirt, and she swims very beautifully. This cute little guy was determined to leave the sea and be with the human boy he likes, but unexpectedly caused a catastrophe. Miyazaki’s "Golden Fish" has got rid of Christianity and turned into a childish child. The story centered on her is a love adventure for children.

This new work has a concise plot and not many characters. It does not have the heavy theme of "Princess Mononoke", the dizzying information of "Spirited Away", and the magnificent scenes of "Howl’s Moving Castle". . However, it is not simple, Master Miyazaki has placed his own life thinking and the demands of the times in it. You can take a child’s heart and regard it as a beautiful fairy tale, or you can read many different things with an adult’s heart.

"Everyone has an inner ocean hidden deep in their consciousness, which is connected to the rough outer ocean. Therefore, I will do an animation that does not use the sea as the background but as the main character on the scene. The animation depicts a teenager. The original things such as girlhood, love and responsibility, sea and life encourage people to move forward in this age of nervous breakdown and anxiety."-Hayao Miyazaki

Hand-painted throughout Ghibli challenges a new style of painting

This film gathers the most trusted animation elites of Hayao Miyazaki. The painting supervisor is Katsuya Kondo from Miyazaki from "Kiki’s Delivery Service", the art supervisor is Norodom Yoshida who has been active in the front line since "Princess Mononoke", and there are also experienced screen director Atsushi Okui and color designer Yasuda Dao Shi.

Ghibli’s animation people have made a bold attempt to return to the basics-the entire animation does not use CG at all, and all of them are hand-painted, making the pictures show the simple style of children’s picture books. This pleasant painting style shining with fresh breath injects warmth and tenderness into the work.

It is said that Hayao Miyazaki’s idea of ​​changing his painting style was inspired by Western art. Before the start of the production of this film, Hayao Miyazaki saw Millais’ famous painting "Ophelia" at the Tate Gallery in London, England. The magnificent picture of this work shocked him greatly and moved him to rethink painting. the way. In the end, Miyazaki decided to go back to the original point, abandon CG, and return to the hand-drawn method of cartoons, which gave birth to "Goldfish on the Cliff" in a style that is very different from modern animation.

In this film, 80% of the scenes related to the sea account for 80% of the scenes. Hayao Miyazaki pays great attention to the performance of the sea and waves. He has carefully observed the sea in the storm and captured the dynamic and changing forms of the waves. Of course, these experiences have been used in new works. At the same time, the sea in the film often appears with a vivid face with will. This anthropomorphic technique shows the unique world in the eyes of the child, forming a witty and impactful effect.

"Goldfish on the Cliff" is a wonderful work, it is the crystallization of Miyazaki Master’s skillful techniques and innovative ideas.